Disclaimer: If there are references to products or services, I certify that I either personally use them or stand by them. If you’re interested in using one, click the link so I’ll make a little money and you can tell your friends you helped keep the lights on over here. 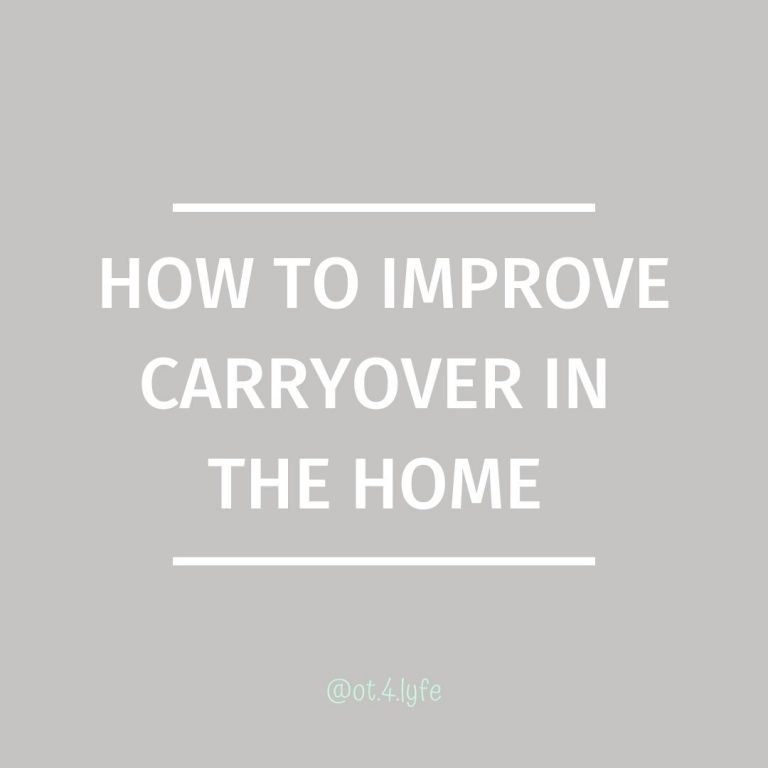 Ways To Improve Carryover in the Home

Ever struggle with getting your client to carryover an exercise or strategy that you have suggested when they’re at home?

I know I have and it has really made me reflect on what it is that I am asking them to do and also how I am wanting them to do it.

While I used to be prescriptive in my home exercise programs (i.e: do this task 5x everyday for 2 minutes each time), I quickly realized that my clients barely ever did the task I had asked them to do. Regardless of how important it was.

So rather than just blame them and keep requesting the same thing over and over and getting a poor response, I switched up my approach.

I began thinking generally about habits and routines. I read the book “Atomic Habits” by James Clear and realized that my clients might have better outcomes if I helped them learn to stack tasks into their natural occurring routines that are already happening.

I began taking a more holistic view looking at each client and their typical daily routines. Once I had a pretty good idea of their routines, I then began to try to embed whatever it is that I want them to do into their already existing daily routines.

So rather than me expecting my clients to just stop everything they were doing to focus on this task I wanted them do to do, it became how can we embed this task into the routines that you are already doing, where it doesn’t hinder anything. And hopefully over time, it can become a habit.

For example, when I wanted a kiddo to do some sort of gross motor activity, I asked them to try it during natural transition in their day, like when moving from their bedroom to the kitchen and instead of just walking they could do frogs jumps.

Or when I wanted the caregiver to do some oral motor exercises on a young child that is still in diapers, I’d recommend them doing them at each diaper change, since that is something that naturally happens many times a day.

And amazingly, I started to see many more positive results in the carryover with my clients. So if you’re struggling with carryover for your clients, think about how you can embed the exercises into their already existing routines. And if you haven’t yet, check out the book “Atomic Habits”.

How do you ensure carryover of home exercise programs with your clients? Share your tips and tricks in the comments.